Gautam Gambhir said, if needed, then he will get aggressive against Kohli 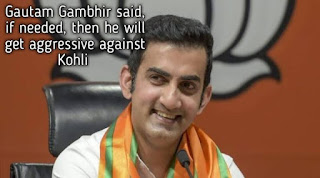 Former cricketer and BJP leader Gautam Gambhir had said Virat Kohli about three days ago that he is not a smart captain and in this case, he has been compared to former India captain Mahendra Singh Dhoni and vice-captain Rohit Sharma in limited-overs format Can not be Virat Kohli, without mentioning the name of former opener on Friday, regarding the comments of Gautam Gambhir.
After returning to Team India after two years, opener Gautam Gambhir on Tuesday spoke openly for the first time about Indian Test team captain Virat Kohli about his well-known relationship. He said that he and Kohli are of an aggressive nature, in which there is a passion for cricket. We want to give our best on the field.


In such a situation, if needed, then he can be seen again aggressively while playing against Virat Kohli on the field of cricket.
Gautam Gambhir said that he and Kohli are players with the same nature and both have the best performance for their team on the field. If I play again against Virat and during that time aggression will be needed, then I will do that again. '
Kohli said that if he started thinking that people sitting outside would sit at home. Regarding Gambhir's comments, Kohli said, "Surely you want to win the IPL. I do not care if I win or not win my IPL will be criticized. You do not make any limitations, I try to do my best, as much as I can. I want to win all the potential titles, but sometimes it does not happen. "
Kohli said If he starts thinking the way people think, like people sitting outside, then he will not be able to play more than five matches even. He would have sat at home.
It was said about Kohli Gambhir, who made the Kolkata Knight Riders (KKR) champions in 2012 and 2014, said that Kohli was lucky that despite being unable to give the title to the team in the last eight years as a captain, he would still be with Royal Challenger Bangalore. Has happened. Gambhir said that Kohli is not a clever captain and is not working the way he should work for his team as a captain. His thinking seems to be completely different from the thinking of captain. I do not even see him as a strategic captain, he has not won the IPL, a captain is as good as his record is."
After playing for seven years with KKR, Gambhir, who was separated from the team in 2018, said, "Kohli is a part of the RCB and he is captaining the team for the last seven to eight years, he has been very fortunate and he has got this franchise Thank you so much that he stayed with them, because many captains who do not win the tournament are not given such a long time. "