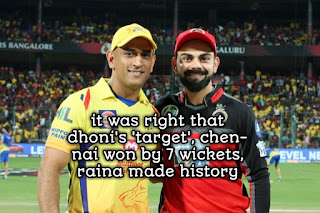 The inaugural match of the Indian Premier League proved to be unilateral between the great veteran Chennai Super Kings and Royal Challengers Bangalore or. In the first match of the tournament, the pitch was not ideal at all. The audience did not enjoy the Jhajjar shots, but Chennai started their campaign with victory

In the only match of the Indian Premier League (IPL) -12, Chennai Super Kings started their campaign by winning a very easy win. The easy target of 71 runs scored on a little difficult pitch was achieved by Chennai losing three wickets in just 17.4 overs. Ambati Rayudu scored 28, then Kedar Jadhav 13 and Ravindra Jadeja remained unbeaten on 6. One-a-word came in the part of Chahal, Mohammad Siraj, and Moin Ali.
In the opening session, the Royal Challengers' innings were reduced to just 70 runs in 17.1 overs after being invited to bat first before Chennai.

In fact, there were two big reasons for bad weather in Bangalore. Toss proved to be a very big factor in the match, which went in favor of Chennai. Dhoni had already read the pitch very accurately and came out on the field with full preparation with three spinners. Choosing the three spinners in XI was enough to tell that Mahi chose a bowling attack according to the pitch. After this, the importance was also tossed. And when it went in favor of it, it did the work of sleeping on gold.

When he picked up the bowlers, the spinners fully proved their decision, taking eight wickets out of ten, prepared the basis of Chennai's victory in the first session.

With the passing of time, the pitch became slow and it became difficult to bat on the pitch on the pitch for Bangalore. However, Suresh Raina made a big history. Suresh Raina completed five thousand runs in IPL in his short run in 19 runs. Suresh Raina became the first batsman to become the first player in this IPL history. At the same time, Harbhajan Singh was adjudged Man of the Match. First Power Play (Beginner 6 overs): (Only 2 fielders out of 30 yards circle)
Watson could not even open account

The Pitch of the Chidambaram Stadium had already proved in the session that it is useless to talk about power here. Seeing the target of 71, there was no need to show the power of unnecessarily. But where do the aggressive bats come? Shane Watson, who was forced to flutter in the third over, tried to flutter Yuswendra Chahal. With this, the beginning of Chennai also got worsened. Watson could not open the account too. English Officer Moin Ali took a good test of patience and patience of Rayudu and Raina.

Overall, in the first six overs of power-play, Chennai's batsmen were also slow on Bangalore. And during this time Chennai's score was only 16 runs on 1 wicket.


Chennai's legends come back on back foot When Watson was dismissed cheaply, then the Chennai batsmen realized that there would be no grandfather on this pitch. And there is no alternative except to coordinate with the pitch. Rayudu, however, showed a lot of confidence in the second over when he was caught by Ravindra Jadeja in the second over, but it was better to take Watson's wicket away from him as a defensive approach.