Due to Deepa&#39;s injuries, Dipa might not seem to play further 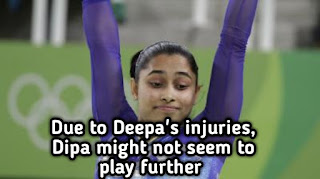 Jimmy Dipa Karmakar, who is fourth in the Rio Olympics, will be included in the Target Olympic Podium Scheme (Tops) for the Tokyo Olympics after examining her medical report.
Actually, during the Baku World Cup, Dipa got injured in her knee.

Dipa Karmakar was born on 9 August 1993. She is an Indian artistic gymnast. Dipa first gained attention and came to the limelight when she won a bronze medal. In 2014 she participated in the Commonwealth Games in Glasgow and became the first Indian female gymnast to win the bronze medal. She changed the entire history by winning the bronze medal. It was high time and she became popular and gained fame.

During the Baku World Cup, she got injured which is why she is facing problems. The committee at present has postponed the final decision.
It is not clear whether Dipa will be seen participating in further matches or not. Well, fans of Dipa are praying for her recovery and want to see her playing. But now at present, nothing can be said as the entire decision is on the Committee to include Dipa for the further matches.

The committee has postponed the decision to include Dipa in the tops. Not only this, no other gymnast has been included in the tops. The Top Committee took seriously the knee injury of Dipa in Baku World Cup. Apart from them, no gymnast is considered to be a contender for winning medals at the Tokyo Olympics.
Before the Jakarta Asian Games, Dipa, Ashish Kumar, Aruna Buddha Reddy was included in the tops, but the disappointing performance of all these gymnasts forced the Tops Committee to think before making a final decision. This is not the first time that Dipa's knee injury is in depth. In Asian Games, she was injured during landing at Walt. After this, she had to undergo from some circumstances in Baku again, last week. This is the reason that the committee wants to study their injury.
Only after seeing the medical report the committee will consider the inclusion of her in the near future.

The showcased doctor who treated Sachin
after returning to Baku, Dipa has shown his knee to Mumbai based Dr. Anant Joshi. However, sources say that their injury is not serious. Regardless of this, there has been concern over why this injury has been rising again and again.

They will also take some time to recover from them. On the basis of Dr. Joshi's report, the Tops Committee will take a decision on Deepa. Dr. Joshi is the same doctor who has treated Sachin Tendulkar for a long time. The special thing is that the Sports Ministry has given Deepa's treatment at its expense.
Seven gymnasts named by the Top Committee:
Apart from Dipa, Ashish, Aruna, Ropesh Patra, Yogeshwar Singh, Parineeti Das, Parineeti Nayak were named after the tops to include in the tops, but none of the exhibits except Deepa in the eyes of the committee turned out to be Olympic level, Could be given place in
Point Table