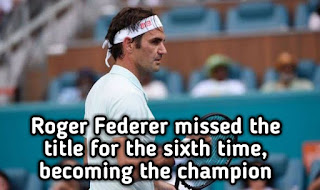 Indian Wells (America), Reuters Dominic Thimm captures the title of his first ATP Masters 1000 title, with Switzerland's legendary Roger Federer winning the record sixth Indian Wells tennis title. The Austrian 28-year-old player defeated Federer 3-6, 6-3, 7-5 in the men's singles for two hours and two minutes. Earlier, he was the runner-up twice in the Madrid Masters final.
Thim, who won the 12th title of his career, defeated Federer for the third time in five matches. However, this is their first win against this legendary player on the hard court. With the World Ranking Fourth Ranking player, along with Thomas Mester in 1997, he became the first player to win the Masters 1000 title. Federer recently won his 100th career title in Dubai, but he could not record the sixth title in Indian Wells. Federer and Novak Djokovic won the title five times most.

Federer's match was good at the start and he did not have to sweat much to win the first set. At the same time, Thimm won the second set and took the match to the final set. The decisive set went up to Trai Beck, where Thimm took the first 6-5 lead and finally set it up with 7-5 and got the match done.
Andreas won the trophy for the first time: Canada's young tennis player Bianca Andreas became the first wild cardholder to win the women's title of women by defeating Angelique Kerber in fourth place in the world rankings. Andrskook defeated Germany's Wimbledon champion Kerber 6-4, 3-6, 6-4 in the women's singles finals. Andreas won the title for the first time in his career.

The 20-time Grand Slam champion, Roger Federer, suffered a loss in the ATP World Ranking on Monday, while Indian Wells winner Dominic Thimm gained the advantage in the ranking. Federer lost to Thimm in the title of Indian Wells, due to which he slipped to number five with a place lost in the rankings. At the same time, Thimm reached the fourth spot with the advantage of four notches.

Nevertheless, Argentina's Juan Martin del Potro had to suffer a loss of three places and he came to the eighth position. Novak Djokovic, Rafael Nadal, and Alexander Zverev, respectively, in the first, second and third positions. At the same time, Bianca Andreas of Canadian women's world ranking Indian women's trophy-winning trophy reached number 24, with an increase of 60th.
At the same time, despite losing the title to Andreas, Angel Kerber reached the fourth spot with the advantage of four places. Japan's Naomi Osaka remains at number one. Petra Kvitova from third, Somana Halep came from third to third place.


Indian tennis player Prajnesh Guneshwaran, who performed well in the Indian Wells Tennis Tournament, reached the career-best rank of 84 in the ATP ranking.
Ramkumar Ramanathan (139) is the second best Indian after him in the male singles ranking. They lost three places. Due to a knee injury, Yuki, running away from the court, dropped 36 places to 207th position. This Delhi player was last outside the top -200 ranking in July 2017. After this, Saketh Myneni (251) and Shashi Kumar Mukund (268) are in the singles rankings.

Left-handed life in doubles, NedunZhen also succeeded in securing career-best 64th rank Above them, Rohan Bopanna is 36 and Divij Sharan is 41st. Purav Raja (80) and veteran Leander Paes (94) are also among the top five Indian doubles players. Ankita Raina lost two places in the WTA rankings, but she is the best Indian with 168th ranking. After him, Karan Kaur Thandi, which is at 203rd with the improvement of seven places.
Point Table