IPL 2019: 5 players who can join Team instead of Lasith Malinga 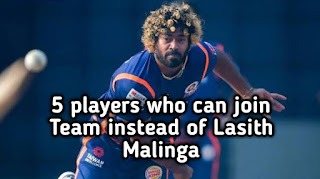 Three-time IPL champions Mumbai Indians have suffered a major setback. Team's main bowler Lasith Malinga will be absent in the first few matches. He will take part in his domestic tournaments in Sri Lanka before the World Cup.

He has made 154 wickets in the IPL for an economy rate of 6.86 in 100 matches. Malinga was present as a bowling coach with the team in the last season.
This season he has been included in Mumbai as the main bowler in the team again.

Mumbai Indians pace bowler Lasith Malinga said that due to the domestic tournament in Sri Lanka, I would be absent from the IPL. When I can be present for the Mumbai Indians again, there will be seven or eight matches. That's why it would be appropriate for me to be included in another team as a substitute. Now talk about those 5 bowlers who can be selected in the team as Malinga's option-
# 1 James Pattinson: In addition to Malinga, Mitchell McClenaghan, Ben Cutting, and Jason Behrndorfer are the only ones in the form of fast bowlers, in which Ben Cutting has been quite expensive, while Bergdorf will leave the IPL after half the season. The team is looking for a reliable option. In this case, James Pattinson can prove to be suitable for the team. Pattinson was associated with the team of Kolkata Knight Riders in 2011 and 2012. However, during the whole season, he was seen on the bench only. Pattinson was also unsold in this season with the base price of 10 million. It can be a suitable choice for Mumbai.
# 2 James Faulkner: Australia's all-rounder James Faulkner can be a good option. He was unsold in the IPL 2018 and 2019 auction. He has taken 59 wickets in 60 matches so far in his IPL career.

James Faulkner, who runs out of the team, is not seen in World Cup plans for Australia. That's why he can be present in Mumbai team throughout the IPL.

# 3 Zaheer Richardson: Australia's fast bowler Zayy Richardson has impressed everyone with his spectacular show in the last few months. Richardson has taken 14 wickets in 6 matches against India recently. In the entire series, he has been able to trouble Virat Kohli. He dismissed Kohli 4 times out of 6 matches.

Richardson's fantastic performance came after the IPL auction, so he was unsold with the base price of 50 million.

# 4 Matt Henry E Bajaj: New Zealand fast bowler Matt Henry was unsold in IPL 2018 His base price was 75 lakh rupees. In this season, he did not include his name in the auction. Henri's recent performance has been fantastic. He had scored five-five wickets in two consecutive matches while playing on behalf of Canterbury in his domestic cricket. They can prove to be an appropriate option in Malinga's absence.

# 5 Vernon Philander S Schei: South African all-rounder Philander was unsold with the base price of 50 million rupees. He is fourth in the list of Test bowlers while 5th in all-rounders. He is definitely entitled to an IPL contract. Philander can be a good option for Mumbai because they do not play ODIs. Which can be available throughout the season.