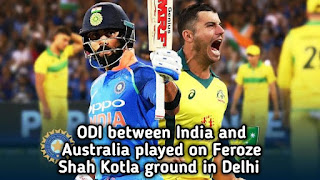 New Delhi: The fifth and the last ODI between India and Australia played on Feroze Shah Kotla ground in Delhi today. Australia won 2-2 in the five-match series by winning the match in Mohali. In the last match, Team India too had a lot of trouble due to the dew, now the Indian team management has asked Kotla's staff to take care of the dew that can have a big impact on the last ODI.
It is also the home ground of Captain Virat, who is also home to Delhi, so he would definitely like to capture the match on the winning series, and at the same time, he would like to indicate that his team is fully prepared and in good form.

If the Indian team wins this series, it will boost their morale significantly before going into the World Cup. The match will be played from 1.30 pm. Series was 2-2 in the fourth ODI In the fourth ODI, the visiting team scored an exciting victory with 4 wickets. Ashton Turner gave his team victory by scoring 84 runs in 43 balls.

Australia won the match chasing 358 runs and India would be disappointed that they could not defend such a big score. India had won the first two matches in the series, but Australia came back with a spectacular return to the series after winning the next two matches. Given the performance of Australia's last two matches in the fifth match, the side of the visiting team is considered to be overwhelming. India can stop the dew of victory
An official of Delhi and District Cricket Association (DDCA) has confirmed that batting coach Sanjay Bangar, bowling coach Bharat Arun and manager Sunil Subramaniam examined Kotla's pitch in the evening.


Support staff told them that they should pay attention to how much dew falls on today (Tuesday) because This will help to test the situation of tomorrow.

They want a report by tomorrow morning and will take some decision after this. " When asked by the DDCA official that the dew can play a bigger role, the officer said, "If the wind goes on, the possibility of dew is low, but today's day was hot so there could be some dew tonight. It should be the same yesterday. " The team had trouble due to the omission in the match played in Mohali and after the match, Indian team captain Virat Kohli also accepted this.
Point Table