Bowler S. Sreesanth made a sigh of relief 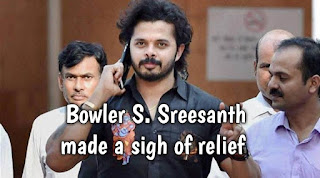 Fast bowler S. Sreesanth has got relief in the spot-fixing case. The Supreme Court has removed the life ban on playing cricket on him, along with the matter he has again sent the matter to the Board of Control for Cricket in India (BCCI). The Supreme Court said in this case that the harsh punishment of life ban should not be in all cases and the disciplinary committee of BCCI did not see those circumstances. He might seem to play for our Indian team soon. He always was seen saying that he is innocent and someone has purposely put the blame on him.
At the same time, the Supreme Court said that we want to clarify that our order will not make any difference to the criminal case in the Delhi High Court. The disciplinary committee of the BCCI will also hear the decision of Sreesanth and will decide in three months.
Fast bowler Andre Nel, who spoke on the rivalry with Sreesanth, 'I wanted to hit him on the head'
It is worth mentioning that against the life bans imposed by BCCI, S. On February 28, the Supreme Court reserved the judgment on the petition filed by Sreesanth. BCCI imposed a life ban on Sreesanth in the IPL-2013 spot-fixing case. Against this decision of BCCI, Sreesanth had filed a petition, on which the bench had reserved the verdict. In the court, in the matter of the BCCI, said that Sreesanth was accused of corruption, betting and dishonoring the game.
Senior advocate Parag Tripathi, who argued in the court on behalf of the Board, said that the game is a life ban for corruption and betting. Tripathi, referring to BCCI's Zero Tolerance policy on this issue, told the court that Sreesanth had never mentioned in front of the BCCI anti-corruption unit that bookmakers had approached him.
In the court, the BCCI said in the court that Sreesanth had not even told the inquiry committee about the source of Rs 10 lakhs, which has been mentioned in the conversation made on the telephone.
In the case, senior advocate Salman Khurshid, who argued on behalf of Sreesanth, said that it is to establish BCCI that it is related to match-fixing of Rs 10 lakh. On the telephone conversation, Khurshid said that the transaction would happen when the player reduced by 14 runs in an over. Finishing his point, Khurshid told the court that a young cricketer who is no longer young, but still there is a passion for cricket in it, his career will be saved from being ruined.
Earlier in the hearing, Sreesanth had said that he was guilty under pressure from the Delhi Police. Significantly, the single bench of Kerala High Court had lifted the lifelong ban on Sreesanth in 2017, but the Division Bench of the High Court restored the life ban on Sreesanth on the appeal of BCCI.
Comments
In the spot-fixing case, all 36 accused, including Sreesanth, Ankit Chavan, and Chandila, were acquitted by the lower court in July 2015. Although the Board refused to change its disciplinary decision despite this decision.