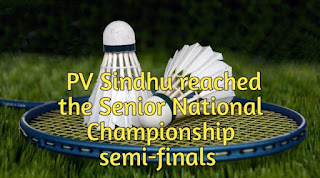 In the men's doubles match of the day, second seed Chirag Shetty and Pranav Jerome Chopra beat V Diju and Rupesh Kumar Katie's veteran duo 21-8, 18-21, 22-20 and entered the semi-finals. Dhruv Kapila and Krishna Prasad have also been successful in winning the men's doubles

Two-time champion PV Sindhu (#PVSindhu) entered the semi-finals of Veerwar in the Yonex Sunrise 83rd Senior National Badminton Championship. Sindhu (PV Sindhu), who claimed her third title, defeated the emerging star Malvika Basuad 21-11, 21-13 in the quarter-finals, after which she will take Riya Mukherjee in the next round. Easily, 21-16, 21-6 in the semi-finals. Meanwhile, 22-year-old Harshil Dani, in the men's section, showed the way out of the fourth seed and last year's semi-finalist Shubhankar Dey 21-15, 21-17. There is a gap of 83 in the world rankings between the two. Day 48 is in the position while Dani is the 131st ranked player. In the men's doubles match of the day, second seed Chirag Shetty and Pranav Jerome Chopra beat V Diju and Rupesh Kumar Katie's veteran duo 21-8, 18-21, 22-20 and entered the semi-finals. Dhruv Kapila and Krishna Prasad have also been successful in winning the men's doubles. The pair defeated Deep Ram Bhaiya and Prateek Ranade 21-17, 21-14 and set up a fight with top seed Arjun MR and Shlok Ramachandran, who defeated Sourav Sharma and Rohan Kapoor 21-11, 21-18. In women's doubles, Kuhuh Garg and Anushka Parekh strengthened their position with 21-10, 21-13 win over Agna Antonio and Sneha Santhilal. In Mixed Doubles, Manu Attri and Manisha K Had to be eliminated by losing to the other seed Sourav Sharma and Anushka Parekh. They lost the match 10-21, 16-21. Round of 16 singles and quarterfinal match (doubles) began with Veerwar. Top-8 seed in singles and Top-4 seed players in doubles were exempted from playing in pre-quarterfinals and quarter-finals, respectively. Asian junior champion Goen Sen defeated Ansal Yadav 21-11, 21-8 in other matches of Singles' Round of 16. Top seed and 2015 champion Sameer Verma, however, were out of the match due to injury. He had won the first game 21-16 against Aryaman Tandon and was 1-8 in the second game. Two-time winner Sourav Verma beat Kartik Dindal 21-8, 21-15. In the same way, to reach the last-8, who got the impression of Balasaheb Joshi and Kaushal Dharmender, they had to overcome the challenge of three games. In the women's singles, Asmita Charlie, famous as Assam's Wonder Kid, beat Vadehi Choudhary 21-13, 15-21, 21-12 in a match that lasted three games. Third seed Shreyasi Pardesi defeated Deepshikha Singh 21-3, 21-7, while junior national champion Kesip Kashyap beat former champion Rituparna Das 21-18, 21-12 to make a big difference. Neha Pandit of Maharashtra continued her glorious performance, defeating the 2018 Tata Open quarter-finalist Anurah Prabhudesai by 21-14, 21-13 while Vaishnavi Bhale of her own state secured Sai Sragajita Rao Chukka 21-13, 21-15. On one side where top-seeded double teams in every section were successful in reaching the semi-finals, whereas Manu Attri and Manisha In the mixed doubles, beat second seed Sourav Sharma and Anushka Parekh 21-10, 21-16.